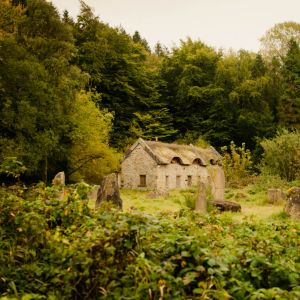 The original castle at Kinnitty was built by the O’Carrolls at Glinsk about 350AD.  Around the same time an Abbey was founded by St. Finian, disciple of St. Brendan of Clonfert, on the site of the present castle.  The original castle was taken by the Normans and destroyed by Murtagh O’Brien in 1209.

The Normans rebuilt it in 1213, and soon afterwards Ely O’Carroll regained control of it.  He succeeded in holding this territory until Cromwell came.

The Abbey appears to have had just as stormy a history, being destroyed by the Danes in 839AD.  Among the abbots at Kinnitty was St. Colman, son of Aengus, King of Cashel.

The present building was originally built by William O’Carroll on the site of the old Abbey in 1630.  The English Forces, as part of the plantation of Offaly, or “Kings County” as it was renamed, confiscated this in 1641.  In 1663 Colonel Thomas Winter was granted 2,624 acres by King Charles II for military services rendered.  The Winter family sold the building in 1764 to the Bernards of County Carlow.  This building was reconstructed as a castellated mansion in 1811 by the famous Pan Brothers at the commission of Lady Catherine Hutchinson, wife of Colonel Thomas Bernard.  The building was burned in 1922 by Republican forces and rebuilt by means of a Government grant of £32,000 in 1927.  The building became the property of Lord Decies in 1946.  He in turn sold it and the estate to the Government of Ireland on 12th December 1951.  The State used the castle as a Forestry Training centre from 1955 until it was purchased in 1994 and turned into a 37 bedroom luxurious hotel for all guests both locally and internationally to enjoy.

Why Book With Us?

Book Direct Best rates for booking on our web site

Book Your Stay
Why Book With Us?

Book Direct Best rates for booking on our web site